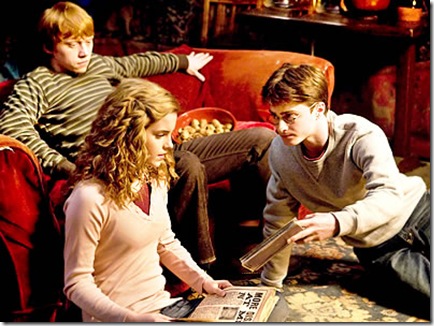 This movie is based on the last of the Harry Potter novel’s written by J.K. Rowling. Screenplay has been scripted by Steve Kloves and the movie has been produced by J.K. Rowling, David Heyman and David Barron. Directed by David Yates, it was split in two parts after being filmed in one schedule. The series has met with stupendous success and all previous six Potter movies have been Top Movies of their times.

This part starts with the Minister of Magic announcing to the wizard media about the Ministry gaining strength with the increase in strength of Lord Voldemort. On hearing from Privet Drive about the departure of Harry, Voldemort takes the wand from Malfoy, since his own wand is ineffective on Harry. Meanwhile at Privet Drive, it has been decided to create six decoys of Harry, before Harry is moved to safer place. The decoys are ambushed and killed along with Mad-Eye and Hedwig, but Voldemort’s borrowed wand is unable to kill and slice Harry. Harry dreams of Voldemort torturing Ollivander on the failure of his wand. Actors who had given the successful Potter movies earlier, have once again come together to give this Top Movie.

Death Eaters disrupt the wedding of Fleur Delacour and Bill Weasley. Harry, Hermione and Ron disapparate London and live at 12, Grimmauld Place, where they discern that the inscription R.A.B on the Horcrux locket stands for Requlus Arcturus Black and that the original Horcrux has been stolen by Fletcher. But Fletcher when apprehended by Dobby and Kreacher, discloses of the locket being with Umbridge, which the trio is successful in getting and flee to the forest. To negate the suspicious thoughts that the locket generates, the trio take turns to wear it. Ron, on wearing the locket, prevails over by suspicion about Harry and Harmione and leaves them. Harry again dreams that Voldemort is seeking information from wand maker Gregorovitch, who reveals that the original wand was stolen by a small boy. Voldemort leaves to find the thief.

In the evening harry follows a Patronus, which leads him to the sword of Gryffindor which can destroy the Horcrux. Harry is unable to get the sword from the frozen lake, but with Ron’s help they finally are able to destroy the Horcrux. After destroying the Horcrux, the three of them visit Lovegood to enquire of a symbol that they had seen quite a few times on their voyage. Lovegood tells them that the symbol stands for the Deathly Halllows, where they can find the Resurrection Stone, the Elder Wand and the Cloak of Invisibility. However Lovegood deceives them to Death Eaters so as to get his abducted daughter back from Voldemort. Harry has the vision that Voldemort has learned from Grindelwald that the Elder Wand is with Dumbledore.

Voldemort arrives at the tomb of Dumbledore and finds the Elder Wand there and shoots a lightening bolt in the sky to make the announcement that he has got the original Elder Wand. The top movie ends here to be finally culminated in the final episode of the Harry Potter Top Movie, Part 2