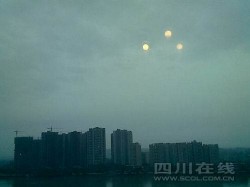 Just your average smoggy day in China… wait a minute! What’s that? A triple sun?
The illusion, deemed a legitimate astronomical phenomenon, is created by the sun being shadowed by two smaller twins and making an image of three suns. The effect is known by experts as the ‘phantom sun’ and unofficially called an ‘ice halo’. It generally appears at this time of year when ice crystals create high clouds.
It also produces an arched rainbow-effect that circles the sun and two surrounding smaller suns. These are both one tenth of the size of the sun itself.
Assuming this didn’t come from a close encounter of the third kind or a three wolf moon passing through a double rainbow, what could it have been? Sunset with triple sun would be amazing!